Systemic Lupus Erythematosus, sometimes called SLE or Lupus for short, is a complicated disease that can look different in any given person. This is why it is often called the disease of 1000 faces. While sometimes difficult to recognize, a rheumatologist can help to diagnose and manage lupus. Read below for further information on this often misunderstood condition.

What is Systemic Lupus Erythematosus?

How common is SLE?

What are typical symptoms of SLE?

I have some of the symptoms listed above. Does that mean I could have lupus?

How is SLE diagnosed then?

Is there a blood test that can diagnosis lupus? My doctor told me I have a positive blood test for lupus called ANA. Do I have Lupus?

I have been diagnosed with lupus? How is it treated?

Is it safe to become pregnant if you have lupus?

What is the prognosis for SLE?

What is in the future for SLE treatment?

For more information on lupus, please ask your rheumatologist. 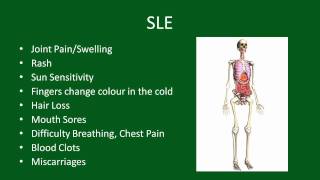 Although we strive to maintain the accuracy of the information provided, we accept no legal responsibility for any errors or omissions. Always check with your own physician first. This website is intended for a Canadian audience. © Alberta Rheumatology 2023